GenetikSignal was founded in 2011 as an anti-aging biotechnology company focusing on the mTOR signal transduction pathway. With the recent development of rapamycin analogs Everolimus and Temsirolimus targeting cell proliferation and FDA approval for metastatic breast cancer, there is excitement in the development of targeted therapies in this pathway for age-related diseases such as cancer and neurodegenerative diseases. These cancer pathways (mTOR/ PI3K/ IGF1R) are being investigated as aging pathways involving mTOR, and IGF1R (insulin-like growth factor signaling receptor) and insulin signaling receptor (IR). Evidence in model organisms yeast and worms have shown this pathway is involved in lifespan extension. The rationale for targeting the IGF1R pathway for age-related diseases stems from the discoveries that IGF1R has emerged as an aging pathway, not only in invertebrates, but also humans in the genetic syndrome- Laron Syndrome, a recessively inherited syndrome caused by deletions or mutations in the growth hormone receptor or pathway which leads to low IGF1 levels and high GH levels. The consequences of long-term IGF1 deficiency are: dwarfism, progressive and marked obesity, hyperlipidemia, relative insulin resistance and even Type 2 diabetes with its vascular complications in some patients after age 40. They seem to reach old age despite these complications and it has been postulated that because of low IGF1 levels they are protected from cancer and have low insulin levels relative to the degree of obesity. This fascinating human model has led GenetikSignal to pursue this exciting drug development endeavor.

GenetikSignal has novel drug targets and strategies to target cancers with aberrant cell signaling: PI-3kinase-Akt-mTOR signaling - a growth signaling pathway de-regulated in many human cancers. GenetikSignal’s drug targets are upstream regulators of this pathway – hot targets and an exciting prospect in oncology drug discovery. With ongoing elucidation of the genetic basis of cancers, next-generation technologies to elucidate the molecular basis of disease and biomarker discovery, big data analysis for clinical trials and systems biology, GenetikSignal plans to develop personalized medicine for cancer in this pathway. 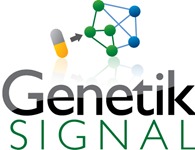